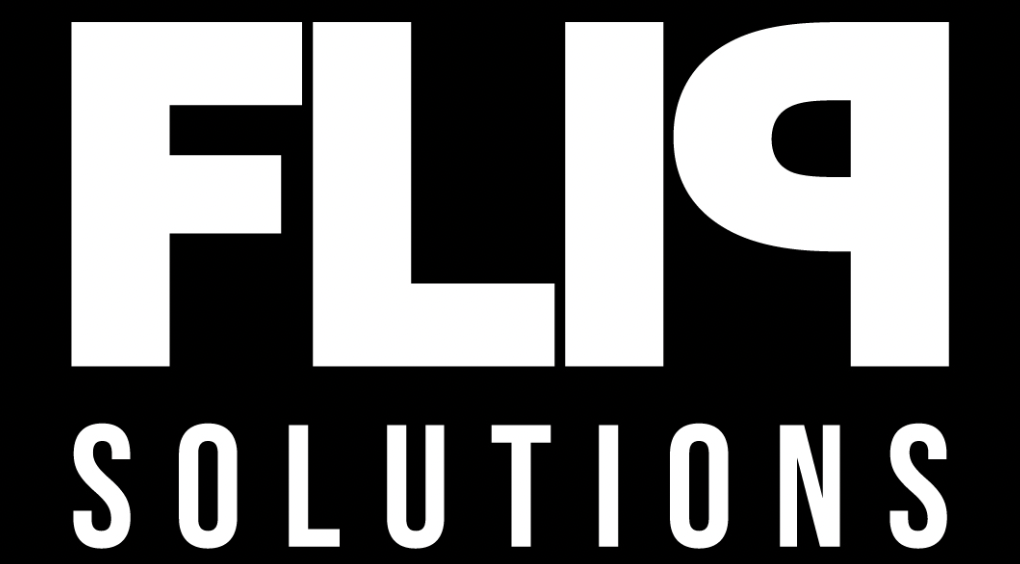 FLIP Solutions is the result of some strangers who got to know each other and had to start a team company in Proakatemia. Between conflicts, fun, happiness and indecisions, trust was built somehow. It hasn’t always been easy for the team, but also not so difficult. Some learnings must be shared by this point of the journey, so the team can increase its abilities and find fulfillment by working together. Some facts must be acknowledged and that is not an easy thing to do, as individuals and as a team company.

The fact FLIP acknowledges now is that, probably, a big group project that every member takes part in it will never exist, and that shouldn’t be a problem from the beginning, since the group is extremely diverse in mindset and interests. The team has had some working activities together such as Flip Tires, and despite being a good experience in terms of team building, financially it wasn’t that good, neither to Luiza mom’s car, hahaha.

Besides, managing a multicultural environment is not an easy task even for big enterprises, so it would not be different for FLIP. From the beginning, the team was able to understand that it would be necessary to know more about each other’s culture and communication styles and how to adapt to those, how to be more understanding towards all those factors. This is one of the parts when people can see teammates growing empathy towards each other and it is really satisfactory.

The different perspectives of life, backgrounds, ages, communication styles and cultures are a work in progress, and it is really good to see the evolution from the starting point till nowadays. Dialogue was difficult and many times were monologs, misinterpretations kept happening due to not having a common ground regarding a native language, and even online messages used to become big problems. Now, the team learned the dynamics of dialogue much more clearly and everyone developed in this matter. Some began not expressing their own opinions and thoughts, more on the observative cultural side and others are much more reactive and also learned how to control those reactions for a greater good.

As time goes by people can see some concepts the team learned together, for example about how to work in a multicultural organization. In one of the pajas, the Lewis Culture Model was explained and, as a personal opinion, people inside the team are quite nicely divided into this theory of “dividing culture”. Briefly about the Lewis Model, divides culture and explains the influence it has on businesses communication, it is a tool used in order to understand a team’s big picture so then failures can be spotted in the team dynamic, and the positive points would be cumulative when it comes to the success of the company. The three divisions of the model are as in the following image: 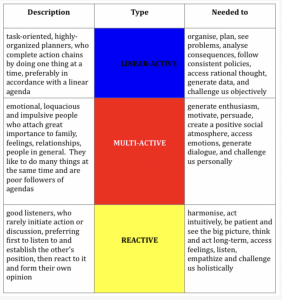 FLIP is a team made by Europeans (Finland, Poland and one semester with Swiss friends Yann and Nicolas), South Americans (Brazil, Peru), North Americans (USA) and Asians (Vietnam and China)’’ and most of them can be inserted in some of the categories. The most incredible thing is that these characteristics are closely linked to the construction of the culture of each people and the internal and external influence that the concept of culture can make in an individual’s life. 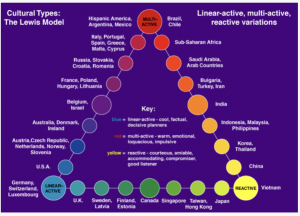 It is moving is to see that, despite so many disagreements and complicated situations, the team has been developing diverse soft skills like teamwork, collaboration and networking with different people, adaptability, and also conflict resolution. All this with the communication and language barriers crossed with respect so that each one exercises their role within the team in their own way.

Last semester the group had to handle serious situations regarding a team member. That was when the trust started to fall apart. Personal conflicts between team members never stopped happening, but the trust was able to stay still between some. The serious situations above mentioned were jeopardizing the entire team and its dynamics and that was when the leaders at that time knew the big challenge ahead of them. Veikko Airas and Ella Muja, the co-business leaders back then, were able to dialogue frankly with the team and TAMK responsible for the matter. Dialogue happened as never before, with patience and a clear explanation of the facts. Not only due to the legal compromise the team have as a company but also so every member could get the picture of what was happening and the reasons why consequences should exist, not just be ignored. The team lost its focus due to this reason, and currently is trying to get it back along with the trust that is lacking due to all the unsolved conflicts that happened in the past.

In FLIP, some people see entrepreneurship as their main goal, others prefer the leadership side and are not so business-oriented. Other people are really focusing on theoretical learnings that will be used in the future as employees or as entrepreneurs as well. FLIP is the first international team of Proakatemia and the course itself is a “test”. It was not well planned and has barely the support or attention coming from TAMK side when it comes to our general needs, for example, the knowledge we are looking for at University. The evolution of the course is basically done with ENTRE20 as some kind of base on what to do and especially on what not to do. FLIP has had coaches lecturing only in Finnish when they knew some people could not speak or understand Finnish at all. FLIP has had so many canceled courses because of TAMKs disorganization combined with online useless courses that made the feeling of emptiness grow in the team.

On the other hand, people are developing at a constant pace, filling the gaps with self-awareness and teamwork. This can be seen as time goes by and new interests grow, and people go deep into what they like and the effect of that can be seen on the team. The amount of teamwork abilities and understanding that it takes to develop a multicultural environment such as FLIP Solutions is something the team must be praised for. No other team in Proakatemia has ever had this before and seems like the dynamic is starting to thrive.

The new leadership team started in 2021 December, when the team had an open discussion instead of voting for the company positions, an interesting way of choosing leaders and exercising dialogue. Named “Ämmät”, the group is composed of three feminist women with strong personalities and brains, Esme Luhtala as the new Business Leader, Luiza Vago and Saana Keränen as Human Resources. The real practice only started at the beginning of January, where the team settled their goals for themselves and an overall view for FLIP Solutions.

After spending so much time dealing with conflicts, now the team is moving forward. The new motto of FLIP was decided in November in the mökkipaja. Not 100%, but “Efficient Performance: No Bullshit!”, was already running through the team’s tongs, and in the decision-making process of the new leadership team, that was the main argument. The team was feeling lost for a while in the sense of not being able to achieve learnings such as theoretical, business-related, and some people were frustrated due to a big aiming of having a big group project. The good part of this situation was that most of the individuals have their own projects inside the company. And that is where the motto came from.

“Efficient Performance: No Bullshit!” is the method chosen by the leadership team to evolve our company by developing people, their projects and personal objectives. The focus is the individual, and team learning and building happen by sharing project and theoretical learnings within the team. In order to do the best work possible, the leadership team divided its responsibilities as it goes: Esme is the respondee of weekly meetings, of the financial team and the contact person of FLIP inside and outside of Proakatemia. She is also responsible for delegation and communication inside the team and for knowing how everything is going.

The HR is composed of Luiza and Saana, working together in basically everything. Luiza is responsible for essays and pajas and for doing monthly checkups inside the team. Saana does the same and is our representative in Jory, also responding for the exchange students from Switzerland FLIP has in the team right now. The leadership team has also its own goals which are not wasting time and space for individual achievements. Ämmäts goals are related to learning, FLIPs organization and delegation of tasks.

After setting those, the leadership group also delegated with the team an inner structure, so every member is doing something, responsibilities are shared and people are not feeling overwhelmed. A big problem FLIP has had was related to a lack of people being proactive, so delegating tasks has been a good way to make everyone active. Kamil and Sandy are the financial team, Emilia is the weekly meeting memo keeper, Gustav, Ella and Veikko are taking care of the learning journey, Omar is working on the company’s website and last but not least, Suong and Jemina are working on forms for the leadership team use as tools to manage FLIPs well-being.

Right now, everyone is developing their own tasks and there is some kind of a feeling that something better is being built. The first monthly feedback the HR gathered from the teampreneurs was positive and hopefully, the leadership group will be able to increase the will of everyone to take action towards a common good. By the end of this journey, it is expected that learnings are achieved and well-being and psychological safety are always a focus since they are extremely important factors for highly efficient teams. Among this new organization, FLIP is also setting goals, something the team was never 100% able to do before. The aim is to find a path for everyone to develop together but also individually. Once you have people acquiring new abilities, knowledge and skills, it can only be good for the team. Hopefully, the new organization and goals will bring FLIP to the flow state.

The Lewis Model – Dimensions of Behaviour

How to create a personal budget