THE BUSINESS OF HUMAN TRAFFICKING

“I am not free while any woman is unfree, even when her shackles are very different from my own”.

WARNING – This essay might contain sensitive information for some people.

Human trafficking is considered one of the most profitable illicit activities in the world, having different purposes such as prostitution, slavery, organ trafficking, adoption and many others. It is a practice in which the victims are completely denied human rights. With no dignity or freedom, trafficked people are treated as objects. This practice happens since the world we know today exists and back then it was also an extremely profitable business. How is it possible that humankind has not overcome this horrifying issue yet? Known as modern slavery, we must wonder what kind of industry gets the profit of this exploitation form. How do we, as individuals, contribute to it and which measures should we take to prevent it?

The aim of this essay is to understand more about this phenomenon that happens all around the world and what feeds this absurd business, criticizing our roles in society and raising awareness around the topic. Starting with the most basic definition of human trafficking, “the recruitment, transportation, transfer, harbouring or receipt of people through force, fraud or deception, with the aim of exploiting them for profit” (United Nations Office on Drugs and Crime).

This crime usually happens with vulnerable individuals, and this vulnerability in the majority of the cases comes from social-economical aspects, like poverty and gender issues. Just as in slums there is the submission of the population to the traffick owners as a means of survival, that is also how poverty favors human trafficking. Manipulation is a way to connect with the victims and the speech used by the criminal organizations is full of promises of a better life, for example. It is good to remind that men, women, and children are victims of this multifaceted crime being the last two main targets. This happens because of the gender condition of women in society,  inequality of treatment and opportunities regarding education and employment, in addition to the extreme sexualization and objectification of bodies that women and children go through every day.

In the beginnings of what we know as property today, men needed women to be their own and private, in order for the male constitution of hereditary rights. At the same time, women were used by them to their own sexual satisfaction, thus, creating a submissive relationship in multiple levels that lasts till nowadays. On this aspect, Friedrich Engels, in “The origin of family, private property and the State” affirms that the birth of private property happened in parallel with the oppression of classes, including women, being totally subordinate to the point of being sold as a destined good to the reproduction and guarantee of men’s reproductive rights. This sociological and historical background shows how women have been considered objects and mistreated as if that was all they were. Women, mostly poor and black ones, as well as transsexuals, feel the effects of that process of conception of private property nowadays and are easily excluded from the labor market, used and treated like objects. Finding themselves in the margin of life, they might often turn to prostitution as a way of earning a living.

However, it is dishonest to ignore the entire social construction around women, sexism, the perspective of femininity and use the legalization of prostitution as a way out of those problems. It just takes about one second to reflect on the fact that men, even if in difficult positions brought up by life, would never even consider prostitution. If men consider selling their bodies, it is not considered immoral by society, or at least not as much as it is for women. Adding to that, men are not extremely sexualized as women. On the contrary, sex dignifies men and for them, there is no reason for any embarrassment, because, as we live in an extremely phallocentric world, it is through sex that a man raises his self-esteem.

The sex and porn industry is always growing and there is no doubt that many trafficked persons serve this purpose. The relationship between the position of women in society, the above-mentioned industries, and trafficking in persons is clear as a crystal and they keep supporting each other. Women objectification leads to sexual exploitation, prostitution and its results are born, such as pornography and human trafficking. The Global Report of Trafficking in Persons 2020 shows: “In 2018, for every 10 victims detected globally, about five were adult women and two were girls. About one-third of the overall detected victims were children, both girls, and boys, while 20 percent were adult men” (United Nations Office on Drugs and Crime, 2020). To add more information and sustain the point, the images below show statistics on the exploitation objectives of women and men who are victims of trafficking, respectively. 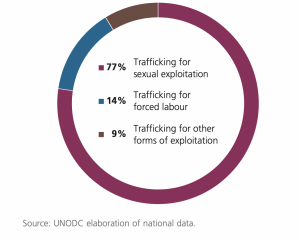 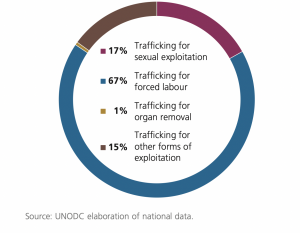 At this point of the discussion, it is necessary to show some thoughts and questions along with Janice G. Raymond says: “Why does globalization channel mostly poor and third-world women into the sex industry at great cost to themselves? Why do third-world women increasingly bear the burden of men’s prostitution culture? Why has it become permissible and fashionable for male NGO members engaged in the fight against poverty, repression of human rights, and environmental degradation to use women in prostitution when they travel abroad to international conferences and meetings? Because these alleged human rights defenders are given permission to engage in the sexual abuse of women under the cover of women’s choice, sexual freedom, and economic development for poorer women from developing countries in the south and for economically disadvantaged women in the north. It is the globalized sex industry and its advocates that reify not only the image but also the reality of third-world women as voluntary sex workers” (Not a Choice, Not a Job: Exposing the Myths about Prostitution and the Global Sex Trade, 2013).

Inserted in slave labor or commercial sex in the world of industry on the Internet, women and children trafficking on persons was amplified by globalization. The Internet as sometimes called “no one’s land” makes it more difficult to find these offenders and easier for them to keep unidentified. On the other hand, it gets easier to produce and consume abusive content with trafficking victims. It is important to remember that there is no industry without demand, meaning that there is a clear reason why human trafficking is a billionaire business that happens worldwide. The solution, in this case, is more related to a non-phallocentric education which would result in a less sexist world and real change in the system, other than that, for example, legalizing prostitution is not a possible solution.

Legalizing prostitution actually means legalizing violence against women and their bodies, objectification of those, and using a fake liberal moral that keeps hurting women and feeding men fetiches and sexism. On that matter, Janice G. Raymond affirms: “The labor model rebranded the entire system of prostitution by transforming pimps into business agents, brothel owners into sex entrepreneurs, prostitution users into consumers, and women in prostitution into sex workers” (Not a Choice, Not a Job: Exposing the Myths about Prostitution and the Global Sex Trade, 2013).

The other forms of human trafficking also show relevant numbers but definitely not as much as destined for sexual exploitation. The image below from The Global Report of Trafficking in Persons 2020 presents a graph relating gender versus exploitation form, and it can be concluded that women and girls are mostly trafficked to fulfill prostitution demand, in bordels or on the Internet. On the other hand, men are destined for forced labor. 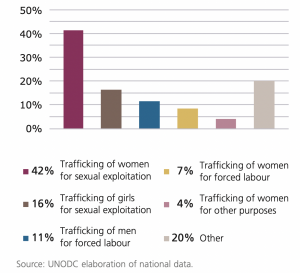 It must be clear that human trafficking is one of the biggest businesses in the entire world and that are many ways to perform this crime and hundreds of different tools to execute it. The Forbes article “Cracking The $150 Billion Business Of Human Trafficking” quotes Bradley Myles about the annual profit of it: “Human trafficking is a $150 billion a year global industry and can’t be fully addressed without businesses taking active and effective measures to reduce the potential for exploitation within their own systems” (Niethammer, 2020).

Organized crime and gangs act like companies and many times even have shell companies. The difference is, obviously, the animosity of the business they do and the extremely violent and perverse means to do it. Besides shell companies, traffickers usually get help from legal businesses such as modeling agencies, banks, airlines, and also corrupt governments and public services. There are also legitimate businesses that acquire the working force through this modern slavery system, such as agriculture. The criminal organizations also take advantage of crises such as the COVID-19 pandemic, which brought more people to a social vulnerability level, making it easier for them to be dragged into illegality. There are different traffickers structures and the Global Report of Trafficking in Persons 2020 explains them in an easy way with the upcoming image: 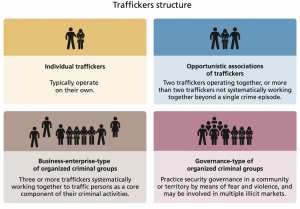 International and local legislation are all the time developing when it comes to human trafficking, with the attempt of reducing this crime and making people more aware of it. There are many different international laws and protocols regarding trafficking in persons with the goal of fighting all forms of “modern slavery”. The most important example is the Palermo Protocol or The UN Protocol to Prevent, Suppress and Punish Trafficking in Persons, Especially Women and Children, where the definition of human trafficking was agreed and bound between countries. Signatory countries commit to strengthening their domestic legislation in order to combat human trafficking and article 2 of the Palermo Protocol outlines its purpose:

The purposes of this Protocol are:

(a) To prevent and combat trafficking in persons, paying particular attention to women and children;

(b) To protect and assist the victims of such trafficking, with full respect for their human rights; and

(c) To promote cooperation among States Parties in order to meet those objectives.”

At a local level, Finland is a signatory country of the Palermo Protocol and many others related to human trafficking. Thus, an article from the Finnish Immigration Service states that the number of human trafficking victims increased in 2020. Finland has victims being subjected to forced labor in agriculture, sexual exploitation, forced marriage, and other crimes such as fraud (Migri, 2021). It is important to know about this topic since it is more common in everyday life than people normally think and it is an extremely powerful business hidden – in plain sight – in unimaginable places. Small actions such as supporting a feminist education system and not consuming pornography on the Internet are ways of avoiding human trafficking. It is important to be able to recognize situations and victims, in addition to knowing where to report. The Finnish Police has on their website quite useful information around the topic, and some steps to be taken if you, reader, realize signs of human trafficking are:

E., Friedrich. The origin of family, private property and the State. Published by Penguin Classics, 2010.

Global Report of Trafficking in Persons 2020, United Nations Office on Drugs and Crime, 2020. Accessed on 2.1.2022. Available on https://www.unodc.org/unodc/data-and-analysis/glotip.html

R., G Janice, Not a Choice, Not a Job: Exposing the Myths about Prostitution and the Global Sex Trade, 2013. Published by Potomac Books.