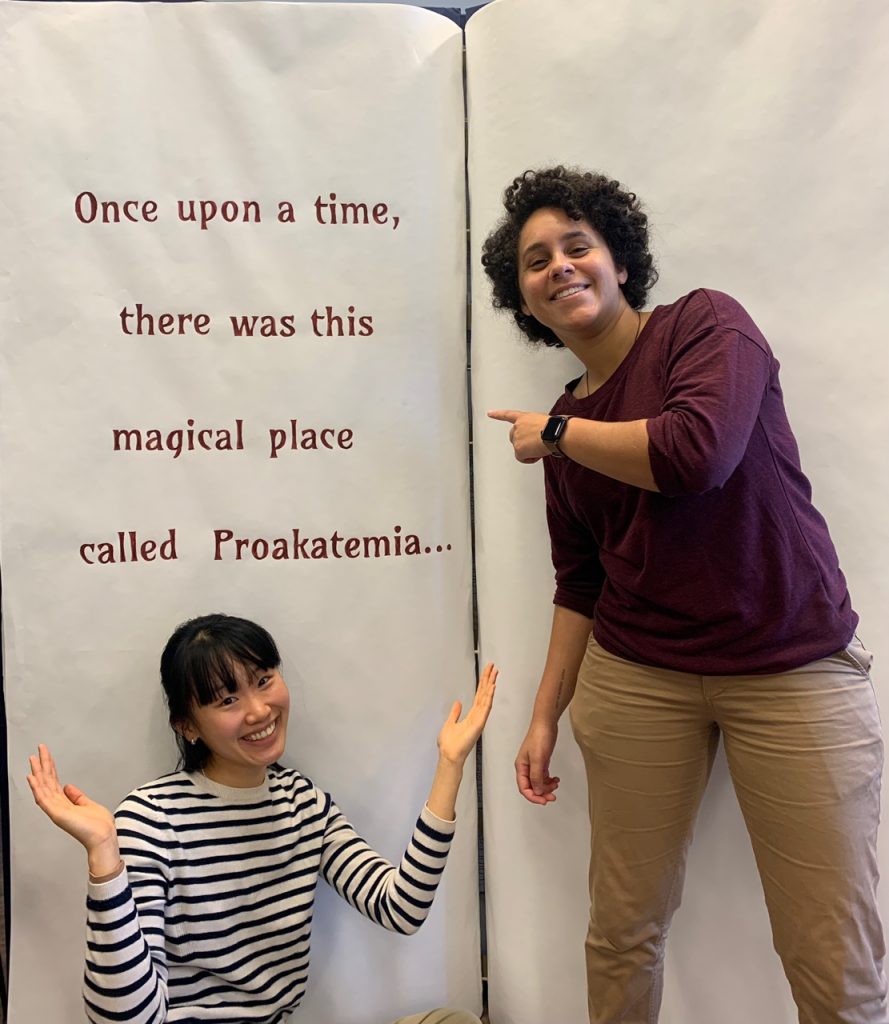 Real story of Avokeittio: what we failed and how have we kept moving forward

Changing ideas from our heads to actions is not easy, well I have to say it requires a lot of effort. It is easy to be excited about your idea but keeping moving forward consistently with your team while getting through frustration and disappointment is painful, as I put it into words roughly. This essay is an extension of the ghost kitchen essay that I made the last semester, which reveals the real story of our project such as failures, learning as a team and how we have changed the idea along the way.

At the end of last semester, in the middle of the evening, I and Thais came up with this “awesome” business idea, Ghost kitchen. Excitement became bigger as we discovered that such kitchens don’t exist here in Tampere, while in other countries like Korea and America, the ghost kitchen business grew enormously after the pandemic. We opened the Miro board, started building our idea, and named the project Avokeitto which means Open Kitchen in Finnish. When I think back to this time, we simply did not know anything but were filled with assumptions and excitement. Soon after the excitement led us to pitch our idea to the team SYNTRE, and we invited 3 more team members without any clear objectives or expected roles for them. 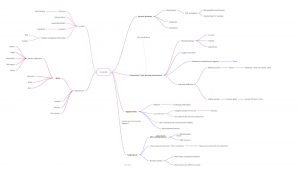 PICTURE 1. The initial idea of Avokeittio. 1st material that was used to pitch.

According to psychologist Bruce Tuckman’s Forming, Storming, Norming, and Performing model of group development, which describes how the team performs along the journey, team members can experience curiosity and excitement but also anxiety in the beginning. Specifically, Tuckman explains that in the forming stage team members can be motivated but seeking for direction from the leader as they are neither fully aware of the issues or objectives of the team (Tuckman, 1965). However, I frankly couldn’t provide leadership and clear instructions for them since I didn’t have enough knowledge about the restaurant industry and experience in project management. After all, 3 members ended up leaving the team.

One of our team members who were responsible for competitor analysis and customer research pointed out that there was no market for a ghost kitchen in Tampere. She shared that the main issue for her was not the team, planning, or execution but the idea itself. And the other one said that it is hard to be passionate about an idea due to the lack of interest.

Clearly, there were other issues that we needed to be sorted out like improving the idea and making a clear business plan, but also aligning team members’ expectations with the team should have been discussed prior to any of those. However, ultimately, this whole process of losing team members brought us lessons.

As an entrepreneur, I believe that it is an important skill to have whom do you bring to your core team, especially under the circumstance of high uncertainty. Having critical points of view from others is valuable and inevitable along the way but at least within the team, I learned believing in the idea and keeping hyping each other by bringing positive energy to the team is a big factor that leads to commitment and eventually to success.

According to the book “The five dysfunctions of a team”, 5 reasons which cause team dysfunctions consist of the following: Absence of Trust, Fear of Conflict, Lack of Commitment, Avoidance of Accountability, and Inattention to Results (Lencioni, 2002). Lencioni says that five of them are interrelated to one another. Lack of trust within the team prevents people from having unfiltered and passionate debates about the idea, and it causes the third dysfunction which is a lack of commitment. Subsequently, team members avoid being accountable which creates an environment they prioritize their own needs over the collective goals of the team. 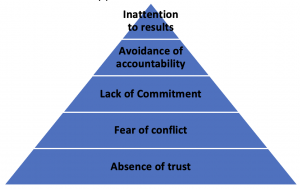 In Lencioni’s theory, it seems easy and clear to make a high-performance team; Trust one another, engage in unfiltered conflict around ideas, commit to decisions and plans of action, hold one another accountable, and focus on achieving collective goals. But it isn’t easy in practice as it requires effort and persistence. It can work out when each member is willing to do that constantly.

Moving to the development of the idea, as we were developing our idea through a red-brick accelerator program, we focused on validating problems and coming up with the following solutions. Having deep interviews with the people who can be our possible customers helped us verify the biggest struggle they face when it comes to opening a restaurant business here in Tampere. It was that there is no firm accessible community where they can get support. Moreover, the lack of knowledge from Finnish regulations and obligations as an entrepreneur to marketing budgeting was another big issue.

Customer interviews gave us valuable guidance to change our path from a ghost kitchen to building a community for micro-entrepreneurs, since we found out our values are not aligned with food delivery companies like Foodora and Wolt. And this is our pitch.

“Entrepreneurship is popular. Still, there are many reasons why it isn’t as developed in Finland as it is in other countries. Food entrepreneurship isn’t an exception. Most micro-restaurant owners face many struggles: Licenses, employer obligations, from marketing to budgeting. It isn’t only about the lack of capital but the absence of a firm community-based platform where they can share their learnings and support each other. The food business in Tampere is growing, but the infrastructure for microentrepreneurs to start and maintain their business isn’t following.

We are building a solid community that is solely  targeted at restaurant entrepreneurs to help them to establish and maintain their restaurants. To do so, we are expanding our network. We are working close to the cooks, pop-up businesses, summer trailers, and small restaurants to understand their obstacles deeply. Our next step is to create a cloud kitchen. The main goal is to unite newcomers and experienced crew in a shared space that is beneficial for everyone. We are starting here in Tampere, but we will sell our methodology and technology to other cities in Finland on our road map.”

Now that we changed our direction to community building, the question was how to build a community, and how to make it profitable. More importantly, we needed to set a clear vision and mission for Avokeittio and come up with a clever business plan. There is an already existing industrial test kitchen in platform 6 that is opened to the public where people can rent but is rarely used by customers for several reasons. Problems with the Platform 6 test kitchen were clear, that there is no committed team who runs the kitchen to improve the user activity and as a result, the kitchen is hardly exposed to the market. We had a strong belief that Avokeittio can be the perfect fit as a solution giver.

First of all, Avokeittio’s vision is to make Tampere a micro-entrepreneurship-friendly city that is aligned with Platform 6’s values. To achieve that, our mission is to offer a kitchen space where people can experiment with their menus and get fundamental information about opening a restaurant in Finland. And we, as community builders, connect people to the right people which can be an important step to building a community for micro-entrepreneurs. Because the kitchen is already existing which means that we don’t need big amount of capital, it was a low risk and cheapest way for us to take a step. So, we delivered a proposal to platform 6 to collaborate.

PICTURE 2. Avokeittio logo that was used in a proposal.

We still have certain assumptions about our solution, and we need to validate each one of hose by running experiments. As it has been changed, we might have to change our business model continuously to get the “final” one. Still a long way, isn’t it?

Again, for the past couple of  months, we have been learning how hard it is to put your idea into practice out of paper.

Following information related to the proposal to platform 6 can be found in the next academic essay. 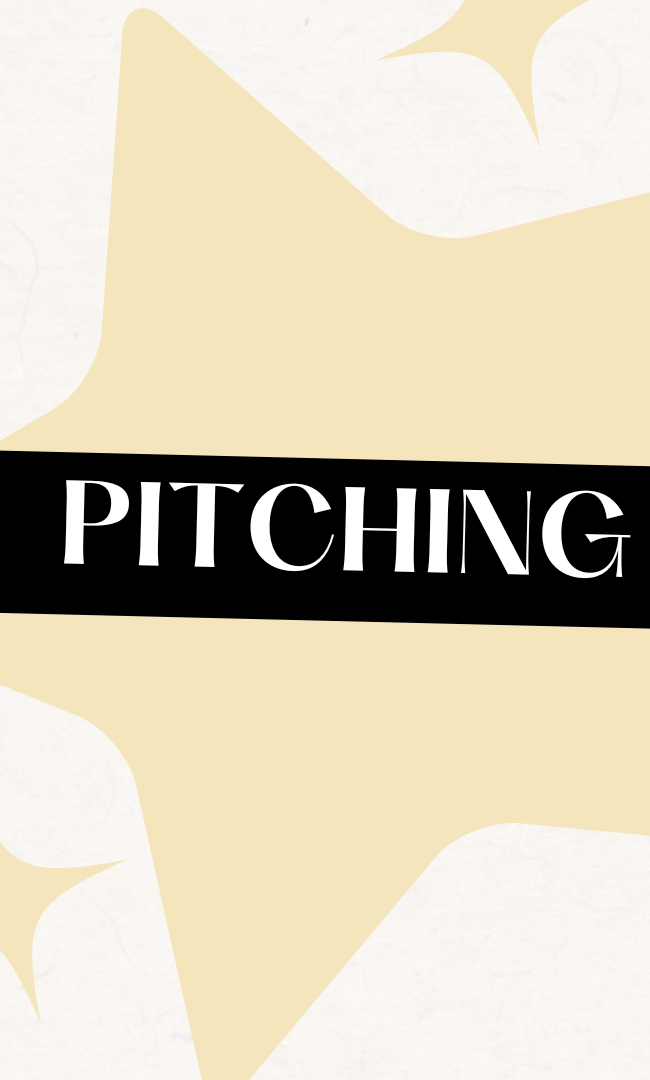 Reduce a fear of public speaking by pitching practice