Guidelines for the essays  | Move to Proakatemia.fi

A large part of keeping employees productive is making sure that there are clear deadlines, but simply setting out goals to hit by a certain date does not go far enough to be reliably effective. I have written about “Wildly Important Goals” before – it is admittedly true, that a well thought implementation of goals and tracking improves productivity massively. (McChesney, Covey, Huling. 2012)

I was recently asked to design a strategy board infographic for a Finnish Motorcycle Club. Before I was aware of one (Finnish) designer who had illustrated strategy infographics. I was also more than aware of the importance of goal-setting and making tracking visible. To me it was obvious that people are much more likely to focus on a due date when they have a consistent and visual reminder of what they need to do, and a clear idea of when they need to have their work done. Yet I had still failed to put this knowledge in to practice, until I got a gig to do it. Not for my own team or project, but for someone else.

Humans have relatively large optic lobes and for good reason; much of the information transmitted to our brains is visual (Vogel, Dickson, Lehman. 1986). We are a visual species who retain information far better when it is – you guessed it – laid out in image form, which researchers say can be processed by our brains far faster than simple plain text (Trafton, 2014). “A picture is worth a thousand words”, they say, for a reason.

People find it easier to understand new topics through visual cues and the chances of them recalling this information later are also greatly improved. By visualizing your business strategy, you can ensure that you and your team spend less time on remembering targets and more time hitting them.

Do not expect employees to remember a non-visual strategy

If it was sent in an email, you can more often than not expect most of the content to have been forgotten or misremembered unless it was immediately actionable. A strategy communicated by way of memo is likely to be either too dense for anyone to be expected to memorise, or not detailed enough to really hit home on the important parts.

Creating a visual of each important part of your business strategy helps to ensure that everyone is on the same page, and further keeps it clear as to what is expected of each team member.

For the sake of your employees, keep it fresh

Flowcharts are boring. They are possibly one of the quickest ways to suck any life and enjoyment out of workflow visualization.  There are so many design options out there and creative ways to approach this… your employees do not need to see a flowchart on the wall. 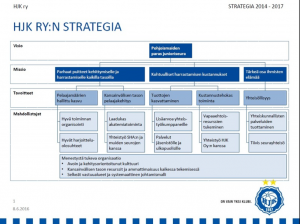 A good strategy for sure – but not the best way to inspire productivity. (HJK ry, 2014)

You don’t need to treat employees like children – they will survive without “primary school” color schemes – but if this is going on a poster-sized pinup for the office break room, it needs to be at least somewhat aesthetically pleasing. If it looks nice and is actually interesting, people’s brains will automatically start picking up the overall message when they spend some time around it. That is the sign of a successfully visualized strategy and one that genuinely, and very quickly, helps to drive results. 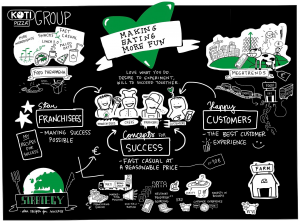 Setting out general expectations for the year and laying a growth strategy along with important metrics for measuring progress can be vital ways to keep all aspects of your company focused. Staying on track can be difficult – who said running a business was ever plain sailing – but having a visual road map for your team that reminds them how to get over the finish line can really pay dividends.

Make it easy for your employees: structure information and make it pleasing on the eye. Even if they don’t notice the difference, their brains will find it much easier to process the strategy that helps them to keep their eyes on the prize. Visualising the Wildly Important Goals – an organized goal-setting method from the book Four Disciplines of Execution – will bring a whole new dimension to any organization’s goal-orientation.

This is just one, simple step you can take now with potential to make huge changes to how efficiently your workforce moves towards achieving company goals. Because while we do like to talk in meetings, it is a scientific fact that the bigger picture is clearer when laid out before our eyes. (Matson, 2014)

“I hear, and I forget; I see, and I remember” – a Chinese proverb

“A picture is worth a thousand words” – a “Western” proverb

Why is it so that in every employee survey the employee’s doesn’t have a clear picture of the direction of the company?

Does this sound familiar? This is a real problem in many companies even if the head of the  company understands the importance of every employee knowing your company’s strategic direction. So even if the goal of the company is clear, why is it so hard to get employees involved?

Well usually even if the employees have seen the company’s strategy in some plain paper or in some boring powerpoint, they don’t remember it after their first glance. Even if the strategic picture is somewhat interesting they still won’t remember it and that is why head of companies have to take a good look on how they inform their employees about plans and goals.

Mankind have always visualized their thoughts with colors and paintings. Even our ancestors did it with cave paintings and rock statues. So why not use it with everything that we do nowadays? Today visualized strategic plan is growing trend in business world. When I was trying to find well made “strategic pictures” I mostly found these old fashioned plans with plain boxes as “visio”, “mission” and “goals” and nothing else. In Finland there has already started new businesses that will help you to build your company’s strategic picture (www.unfair.fi). As I tried to find something similar services outside of Finland, I couldn’t find any. I wonder why it is so. Maybe finnish companies are pioneers of strategic planning and that is why so many of them succeed. Maybe we should take the same approach in our small company Eventa Creative too or maybe even projects that are done in companies should try this too.

Creating simple picture of your projects strategic plan wouldn’t take long and it could be good way to introduce new people to the project team. It also could help with pitching anything, like project or even and idea. Visualizing always helps people to understand ideas and workingways better. 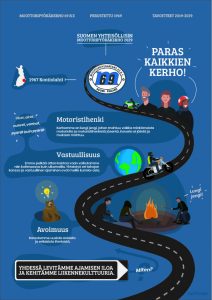 In one ear and out the other. University of Iowa. Amy Matson, 2014.

“It’s a poor craftsman that blames his tools”