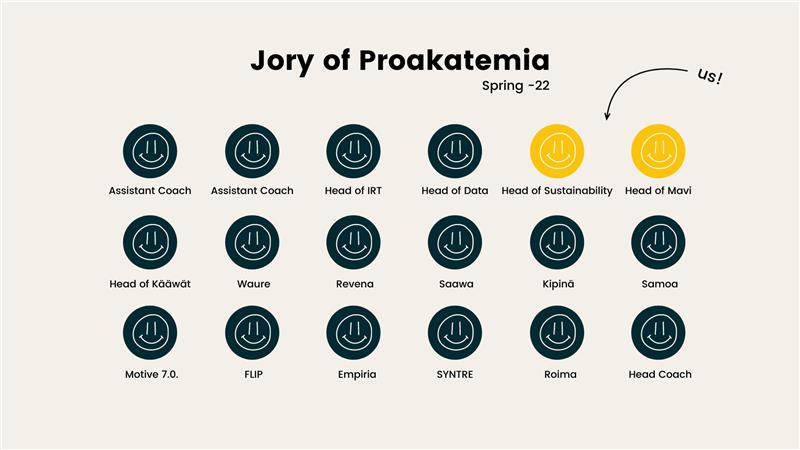 This essay explains how Proakatemia’s board (Jory) works, gives examples of the process and authors reflect on their time as board members in period 21/22.

Jory – the management team or the board of directors

In Proakatemia we have this great thing called Jory (short for johtoryhmä). At the level of thought, we know what Jory or johtoryhmä is, or at least what it is in Proakatemia. But when it actually needs to be defined, it’s hard to find the right words. Let’s look for help elsewhere.

Johtoryhmä translates into English as “management team” but in Proakatemia we also talk about the board which in Finnish is hallitus. Is there a difference between the board (or board of directors) and the management team? Well, the answer is yes.

“A team of which goal is to improve Proakatemia community. The team is formed by the head coach, the team representatives and the students chosen to work in specific roles in Proakatemia such as the assistant coaches, head of marketing and communications, head of data, head of international relations, head of sustainability and the head of kääwät (=student tutors).”

In addition to the board, a large organization may also have a management team consisting of the CEO and her immediate subordinates. Unlike the board, the management team does not have legal status, but acts under the responsibility of the CEO and exercises her power. The role of the Management Team is to assist the CEO in preparation and decision-making. (Erma, Rasila & Virtanen 2019, 57.)

In other words, even though we use the word ”board” for our Jory in Proakatemia, it is really more a management team. However, there are some similarities between the management team and the board, and good management teamwork includes similar elements to good board work.

How is Jory at Proakatemia

So, at Proakatemia, Jory includes the head coach, representatives from each team company and the teampreneurs chosen to work in specific roles in our community (the heads). A member of Jory represents not only his or her own team but the entire community.

Each team elects its own representative to Jory. Back in the day, a member of Jory was also the business leader of their team, but today the representative can be any member of the team. In our experience, people who really want to influence the community and be involved in developing things apply to Jory.

Jory’s goal is to improve Proakatemia’s community. That can contain many things and this year, for example, we have built a new strategy for Proakatemia, considered solutions to the challenges posed by the growing community, and reviewed the challenges related to the relocation of the Proakatemia’s premises. Jory members also decided on the Hall of Fame and the Rookie of the Year awards.

So, the responsibilities of Jory members include a lot of discussions, developing things but also making decisions. However, decisions are not made only in Jory, but the connection between Jory and the teams must work. In our experience, there is room for improvement here, and Jory’s information should be able to be distributed to the teams faster and the greetings of the teams could be conveyed more effectively to Jory as well. Perhaps we could make better use of Jory’s own Teams channel to make information flow more regularly.

Jory members from each team are selected for one year, with some small exceptions. It’s very important that all members quickly gain a deep understanding of the purpose of the board. Firstly, all members represent the interests of their own teams and serve as a communication medium between the Jory and their own team. Together, entrepreneurs who take a seat on the board must assure that the mission, vision and strategy are being followed. These tasks are easier said than done. It’s one of the key learnings from the time on the board. How to, first of all, take action and later follow up on elements mentioned before.

In 2021, Proakatemia’s board started to work on the new vision of entrepreneurship that was used as a base for the new strategy. It took months to define the main pillars, the meaning of them, action points and indicators. Furthermore, it’s not only the board members who contributed to the process, but the whole community through active communication between Jory and teams thanks to the members of the Jory. Without efficient communication, it would take additional time to implement the new strategy. One reason for that is, the board would need extra time to plan and create it. As well as there is a big chance that changes and the new strategy would come as surprise to many and create unnecessary friction. There is friction anyway, as we are over 200 individuals in the community. Nevertheless, through collective thinking strategy has been created together and shall be implemented together. Board will carefully follow up and make necessary adjustments.

How one can actually follow up on the things like vision? It starts with being an example and having eyes wide open. These can be small things, from a positive mental attitude, being open and transparent, to “taking care of things”. These small actions show that people care and create a sense of community. The community was much missing during the time when the Finlayson campus was empty, and most people worked remotely. Now it’s crucial time to restore what was lost and build an even stronger bond between teampreneurs in Proakatemia. Having eyes wide open might sound like an attempt to micro-manage. Don’t be fooled, even if someone sometimes has told you “Not to do so”.

Small example of process board goes through:

During Vuosi Gaala (Yearly Gala), which a graduation party organised by younger teams for the graduating teams. The most important event of the year, where community awards are announced. It is the board, that decides about the nominations for part of these and selects the awards. One person is selected for the Rookie of The Year (Vuoden Tulokas), it’s given to the person who has stood out as teampreneur, the person who has done something unique and everyone has noticed it. It is the board that makes the final decision about who is going to get the award. Jory also decides on Hall of Fame awards for one member from each graduating team. The Hall of Fame award goes to a person who has been consistently contributing positively to Proakatemia’s community.

(Kind of) Motorola of our work in Jory

There isn’t all that much clear and specific information what are the learning goals for members of the board. It takes time for each individual to create these and realise what are the opportunities. These might be different for everyone, as well as the board itself is working with different agendas each year. For example, first, in 2020/21 Jory’s focus was on shifting the community to online mode and later dealing with the side effects of working online and the pandemic. 2021/22 on agenda has been a general community crisis and action plan in a form of the new strategy that has been postponed before due to different events.

It has been a new and rich experience to learn how to make a change. Most people expect a lot and want it now. That isn’t the case with even medium-size organisations, communities, or governments. Change takes time, but to really make it happen there must be a smart plan. Specific, Measurable, Attainable, Relevant, Time-bound Plan. Jory’s vision has been built on 3 pillars and each has been divided into 4 sections. (Reminder: Pillars are continuous learning, community&netwroking, and sustainability.)

In short, there must be a long-term goal and vision that will unite the community. Something everyone will be working together towards. Although, we need to know what makes the promised land, what makes it successful and which of these elements are necessary. Some of these factors are easy to locate and specify, others require more sophisticated methods. Here come indicators or smaller objectives. It might be a wellbeing survey, a revenue goal, project hours, participation rate in the community or the number of sustainable actions the team has taken. Each strategy pillar has its own strategic goals, success factors, indicators and finally action points. Implementation of the action plan is still ahead!

To create the strategy in the first place, there must be good communication in the leading team. Head coach assistant and assistants. Any frictions will slow the process down. Communication is also crucial between the members and teams. As mentioned before, each member of the board is representing one team from Proakatemia and therefore, any communication breakdown would create delays in the development as well as the implementation process.

To many, it might seem like a cliché, but managing and leading a big institution is much more complicated from the inside than it looks from the outside. Board certainly cannot work well without people who have the commitment and want to take things forward.

There would not be learning without reflection and that should start with ourselves.

What have we brought to Jory during our time there?

It has been shy begging, but once the trust has been created, it made room for courage and sharing opinions, raising difficult questions. For us, the authors of this essay, these questions were about the ethics, responsibility, and sustainability of our actions as Proakatemia and teampreneurs. Later we facilitated training session with the board about sustainability together with Saana Keränen. These actions were not easy, but the third pillar of strategy speaks for itself.

We like to think that we brought commitment, bilingualism, and equity too. Much needed qualities in a modern, functional society. Most importantly, we brought our presence. We have been present at almost every meeting of Jory.

We know that in previous years Jory has spent their own mökkipaja (cottage training session) with each other, but these have now been on hold because of the pandemic. However, we think that time spent together like this would build trust between the members of Jory and we hope that the mökkipaja (or something similar) will take place again in the next Jory season. The prevailing trust of the members of Jory would build the foundation for the bold and honest dialogue that is needed and quite often lacking in Jory meetings.

In Jory’s first meetings, it would also be good to go through what Jory is and define common goals. As time passes, it would be also beneficial to continuously evaluate and improve Jory’s work and cooperation. For example, more active feedback could be used to help to improve Jory’s work. There is also room for improvement in posting Jory’s meeting agenda earlier and writing the minutes from the meetings and publishing those more frequently to Teams where other community members can see those as well. There have also been quite many absences and the deputies haven’t always been present either. That interrupts the flow of information to the teams and complicates the functioning of internal communication. It would therefore be important that there should always be someone from each team present at the Jory meeting.

To wrap up this Motorola, finally, what makes a good Jory member?

Our time in Proakatemia’s Jory is coming to an end and soon it’s time to give our seats to the next members. While there is room for improvement, Jory meetings have been our favourite things in Proakatemia this year. It’s been great to get to know people across team boundaries, learn how to build strategy and make a difference in our community. Although Jory’s meetings are always early on Monday mornings, we have attended the meetings with enthusiasm and motivation. Hopefully, that enthusiasm has also been visible to the outside.

Dynamic and entrepreneurial developer of new ideas. Focus on coaching and sustainable development.

Leading team learning – The 5 dysfunctions of a team