There are different forms of conversing. You can stand in a long line at a concert, sit in front of your potential employer, be late for class or just walk into the Asian market hall. The question is always the same. How can you achieve what you want with verbal interaction?

There are different types of communication, we differentiate them based on the end goal, participants, and communication style. Douglas Neil Walton was a Canadian academic and author, known for his books and papers on argumentation, logical fallacies, and informal logic. He identified six normative dialogue types. Persuasion, inquiry, negotiation, information-seeking, deliberation, and eristic dialogue, each with a distinctive purpose and structure. He demonstrated how relevance and fallacy are constituted differently within them, so that the same type of move may be relevant in the context of one dialogue type and fallacious in another (Gregory, M 2006) 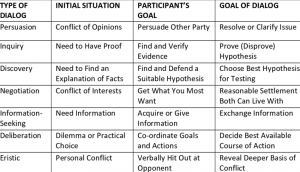 Many philosophers, teachers, mentors, and professionals use dialogue to facilitate learning and achieve their goals.

We can define dialogue in multiple ways. Some say dialogue is the business of disagreement. Some interpret it as the interplay of arguments. We can agree that the purpose of dialogue is to invent discovery. It develops common values and allows participants to express their interests. It expects that participants will grow in understanding and may decide to act together with common goals. In dialogue, participants can question and reevaluate their assumptions as well as others’.

What is game theory? Game theory is a theoretical framework for conceiving social situations among competing players. In some respects, game theory is the science of strategy, or at least the optimal decision-making of independent and competing actors in a strategic setting. It has been applied in many different fields such as business, war, and biology. Game theory has been also used as an economic analysis tool to understand and predict what will happen in economic contexts. Because of the interdependence among users of communication networks, game theory provides a useful framework for modeling users’ decisions.

Plato’s written dialogues historically appeared as an imitation of oral communication in times of heated debates about the transition from oral to written communication. Dialogue as a genre has been used by many thinkers to formulate their ideas in various ways (Dafermos, M. 2018). We can take a look at one of the most famous dialogues in a book called “The Republic” by Plato. He introduces the Platonic method to reason through ideas on justice.

„SOCRATES: Do you also consider unjust people to be wise and good, Thrasymachus?

THRASYMACHUS: Yes, if they do complete injustice and can bring cities and whole nations under their power. Perhaps, you thought I meant pickpockets? Not that such crimes aren’t also profitable if they are not found out. But they are not worth discussing by comparison to what I described.

SOCRATES: Yes, I am not unaware of what you mean. But this did surprise me: that you include injustice with virtue and wisdom and justice with their opposites.

THRASYMACHUS: Nevertheless, that is where I put them.

SOCRATES: That is now a harder problem, comrade, and it is not easy to know what to say in response. If you had declared that injustice is more profitable, but agreed that it is a vice or shameful, as some others do, we could be discussing the matter based on conventional views. But now, obviously, you will say that injustice is fine and strong and apply to it all the attributes we used to apply to justice since you dare to include it with virtue and wisdom.

THRASYMACHUS: You have guessed my views exactly.

According to a quick and literal reading of Plato’s dialogues, the Socratic method consists simply in asking questions. „I am so far like the midwife that I cannot myself give birth to wisdom, and the common reproach is true, that, though I question others, I can myself bring nothing to light because there is no wisdom in me.” Socrates is able to „teach” others because the truth lies within them (Ogilvy, J.A. 1971)

We often hear and use the famous sentence „agree to disagree”. Some can argue that the purpose of a dialogue is to discuss these conflicting ideas. We can view the world from our subjective reality but if the objective truth exists we shall focus on the solution instead of avoiding confronting situations.

There are multiple reasons why people avoid these situations. A person might be in a hurry and debating would take too much time and effort. The second reason is the lack of information and rationality from both parties to move the discussion forward. In the third case, people want to belong and be accepted by their fellows and the risk of a debate is too high, it might cause emotional distress or exclusion from the group. It is less risky to resign and agree in the beginning. This desire to fit into a group with its common values and practices is deeply rooted in our childhood and history as humans. If you disagree with yourself just to be able to fit into a particular group, you are not only putting your integrity aside but also setting up the group for potential failure by withholding valuable information.

The perfect dialogue can only occur between two perfect rationales, however, often this isn’t the case. The case is usually two spam filters discussing an issue without a common goal serving as a guide, moving the discussion forward. It is important to debate consciously while constantly adjusting the context and our conclusions to the theme. In this case, we can avoid miscommunication and useless circling around the topic. Showing disagreement is crucial in areas such as political activism, business, and science. With this thought, being challenged is also highly important in the mission of finding the truth. Do you disagree?

So how do you achieve what you want with verbal interaction? We already covered the first half by stating what you want, what you believe in, and disagree with. The second part focuses on how you can do that. We all know that we should listen to each other, be open-minded and empathetic but this only answers the question of what and not the how.

Know their background! Know where they are coming from and what their communication style is. Are they religious? Are they aggressive, submissive, or perhaps assertive? Do they use emotional or logical words? What is their personality like? What do they believe in? What are their values?

Search for common values, preferences, beliefs! To prepare for the dialogue and create a good connection, it is a widely used practice to search for common ground at first. You can later explore the differences through friendlier and more welcoming lenses.

Ask questions! Prepare questions that will move the discussion forward. Sticking with the interview example, asking questions will show you are actively listening and motivated to be part of the company.

Think with the eyes, values, beliefs of others! You can show empathy the best if you are in the same position as your speaking partner.

If you are able to show that their ideas are valid and accepted meanwhile stating your opinion in an assertive way, you are more likely to come to a conclusion together and reach a common goal which is beneficial for both of you.

Let’s go back to the question of how you can achieve what you want with verbal interaction. If you follow either one of the dialogue models or the tools such as the Socratic method for achieving a particular goal, you will have a better chance of rightfully predicting the other participant’s thoughts and decisions while creating a cooperative environment for learning. We can view social interactions as a big game where you can make the right moves to help your team eventually win and come to a conclusion. Based on these principles, the next time you are expected to interact with people, you will know how to frame the situation in a way that will enable you to make the best possible move.

“That’s what education should be,” I said, “the art of orientation. Educators should devise the simplest and most effective methods of turning minds around. It shouldn’t be the art of implanting sight in the organ, but should proceed on the understanding that the organ already has the capacity, but is improperly aligned and isn’t facing the right way.”

If the goal of education is to show us where and not what to look at then dialogue is a perfect tool of where.