“There is a giant death sentence hanging over much of our world.” (Chris Williams, 2010)

This statement begins the introduction to the book Ecology and socialism by Chris Williams. The world’s population is increasing and so is water usage, ocean acidification and tropical forest loss among other factors deteriorating the planets living conditions. Capitalism still seems to be a dominating player in the field of politics but it simply doesn’t work as an answer to the environmental crisis.

Riding in a car, eating meat or rice, drinking a bottle of water, or several other simple actions of our daily lives, are linked to the destruction of nature, directly or indirectly. The world has been begging for help for years now, and most people continue to ignore it. Why does it happen? Why is human greed never satisfied? And more importantly, why can’t we make peace with nature in a way that we can live without going to the absurd and extreme level of destruction that it is seen today? Sometimes it seems that the human being forgets that without nature, there is nothing.

The once majestic polar bear, now starving due to melting sea ice in the arctic, is only the latest pitiful poster childs for the coming global ecocide that humans are visiting on earth. (Williams, 2010. 1) Thousands of species stand at the edge of extinction and sadly that is not even the biggest of humanity’s problems. As global greenhouse emissions continue to increase, the issues already dealt with will also accumulate.

Scientists, professors, and society, in general, are always discussing to try to understand how and why it all happens, to find a solution for this massive problem that is nature burnout. In the news, headlines about the exaggerated consumption of plastic or of how the air is getting more polluted are quite normal nowadays, and also scary. It seems like people do not realize the importance of those and how alarming they are, and it is everyone’s duty to take care of the environment and to understand why they consume in that way.

However, blaming past and younger generations for the misuse of natural resources is not as effective as understanding and criticizing the system in which they have learned to live the way they do. That system is called capitalism. The raw definition of capitalism – but at the same time, quite complete – according to the Cambridge Dictionary, is “an economic, political, and social system in which property, business, and industry are privately owned, directed towards making the greatest possible profits for successful organizations and people”.

This means that the capitalist logic, as can be clearly seen in the reflexes of society – such as radical climate changes and race and class inequality – revolves around production and accumulation. This logic is not as simple or harmless as it seems since it is well-known natural resources are not endless. On the other hand, the production continues at a hard-core speed as if nothing is wrong in this entire process. It is difficult to know the direction these discussions will take and if they will be really relevant in this point of devastation. 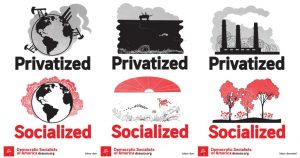 It is difficult to know the direction these discussions will take and if they will be really relevant in this point of devastation. It is a fact that the effects of capitalism are mostly negative. One example is the economic crisis that the world is experiencing today. In fact, when there was no economic crisis? And for whom? When the largest capitalist nations were overexploiting the “poorest” ones? The entire food chain inside capitalism is also quite problematic and it definitely matches the definition of capitalism as private parts getting as much profit as they can. It wouldn’t be a problem if there were no huge social, economic and political effects behind that.

Hopefully, there is still time for a new alternative and a new world. Maybe this option can offer the world real solutions and answers to fight economic crisis and environmental breakdown. Going back to definitions, the Ecosocialist Horizont states, “Ecosocialism is a vision of a transformed society in harmony with nature, and the development of practices that can attain it. It is directed toward alternatives to all socially and ecologically destructive systems, such as patriarchy, racism, homophobia, and the fossil-fuel-based economy. It is based on a perspective that regards other species and natural ecosystems as valuable in themselves and as partners in a common destiny.”

This political ideology gives the world a possibility to avoid the collapse of uncontrolled capitalism growth and of living with greater sustainability. Usually, nature is seen as a primary resource to build economies, so ecology and economy only go together after a disaster happens and damage control is needed. In the Ecosocialist case, the production would already be thought of keeping ecology and nature in mind, making it harder for disasters to happen, since a balance would exist between the society needs, what nature provides and how to use it consciously.

Even though Ecosocialism is more than just environmentalism, it is critical of the capital with an ecological base. The environmental question was already being discussed many years ago, even before the awareness about climate changes or the use of pesticides in food, by traditional communities, indigenous, who have always been conserving and preserving. The theory of Ecosocialism outlines how to be economically sovereign without destroying nature. It is Socialism considering that ecology must be the center of the discussion, answering questions as What is being produced? How? With which objective?

The greediness of capitalism knows no boundaries. In fact, capitalism in its nature is almost limitless which is why it’s no surprise it has reached a point that threatens the whole ecosystem of the planet. On the path the economy currently is on, humans will not for too long have the ability to consciously direct our own future. The consciousness of the problem is growing but the majority of solutions that are even talked about don’t seem to be sufficient enough. The extent of the environmental crisis is so great that fixing the structure we already have is not enough. Energy-efficient light bulbs and plastic recycling centers only focus on individuals making lifestyle changes, when the root of the problem lies far deeper in the system. What would need to happen is a complete shift in the general mindset. Creation of a completely new system that has one priority: the preservation of our planet and its natural resources and diversity.