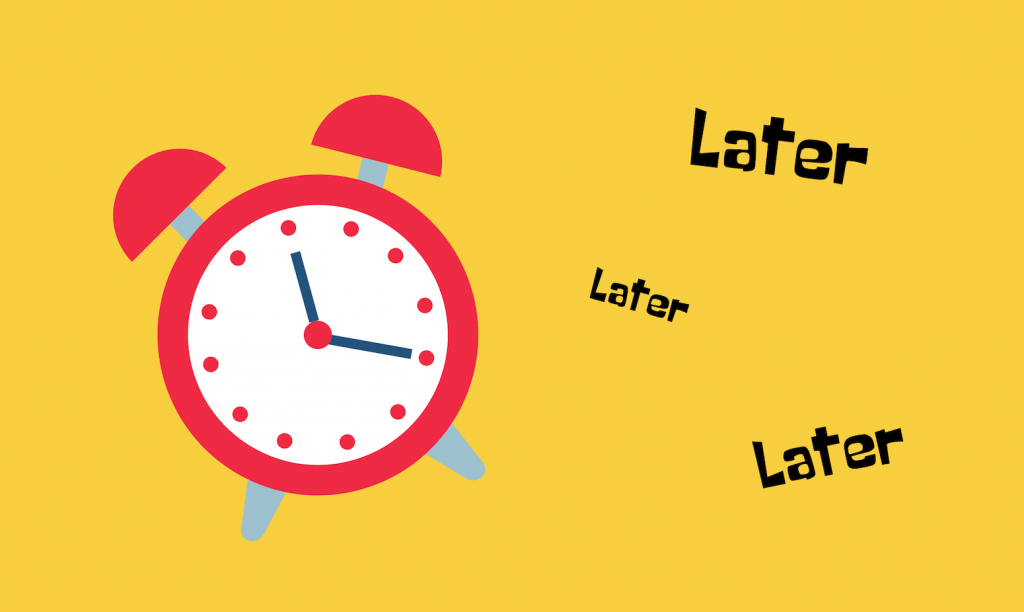 Do you have procrastination? Why you do it?

Have you ever experienced such a scene, the deadline is close, you are irritable, but you cannot sit down and tackle it? Surfing online, cleaning the house, washing laundry, washing dishes, meeting friends. All seem more fun and urgent than working on the deadline task. When it finally comes to the point that if you don’t do it, you will be in trouble, it is either completed overnight, or you decide to find an excuse to give it up. After the matter is over, you might discover that the actual task is not as difficult as expected, and you could have started earlier and completed it better. You get frustrated and regret it. However, when you encounter the next deadline or something you think you could do when you have time, the same scene will be replayed. This is called procrastination. In the dictionary, the verb procrastinate is defined as “to postpone, to prolong”, which is a combination of two Latin words: pro means “backward”, and crastimis means “belonging to tomorrow”. Together they mean “move back to tomorrow”, which also means “do it later” (Chapter 1)

How to define if you are a procrastinator? Why are people procrastinating? This is also a problem that bothers me for years. With these questions, I read the book “Procrastination Why You Do It, What to Do About It Now” written by two American psychologists Jane B. Burka and Lenora M. Yuen.

We must admit that each of us is different, and our living habits and ways of doing things are different. Some people are used to living a busy life. Their schedule is always full. They are used to living in hassle and befriend of stress. While some people are suffering from procrastination. They get frustrated and angry with themselves because procrastination prevents them from accomplishing what they think they are capable of. Although it might look fine from the outside, deep down, they feel extremely hard.

Postponing things is not necessarily procrastinating. Sometimes we just need to abandon something for more important things, or we need time to rest and relax. To identify real procrastination, it’s necessary to know that if it will make us regret it afterward and affect our mood. (Chapter 1) 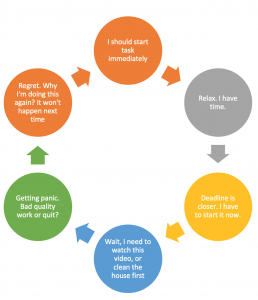 People who have been in this cycle always have a similar experience as mentioned at the beginning of this essay. When you start a new task, you are very confident about a schedule that you will complete based on the plan you made. Although you are not willing to start it right away, you still believe you can manage it well. Often, “let’s relax and do something else first” comes to your head. Like Tim Urban described in his article “The Procrastination Matrix”, there was an Instant Gratification Monkey living in his head which takes over the control from the Rational Decision-Maker sometimes but not in charge (Tim Urban,2015). Until the Panic Monster wakes up, the Rational Decision-Maker leads again, but by then the deadline is near. Your hopes become worries. You must stay up some nights to make things done that you are not very satisfied with the result or find an excuse to give up. You noticed that this situation has happened before and what you just did it’s not better than last time. All this makes you feel guilty, regretful, ashamed of yourself. You’re in the procrastination circle.

Why are people procrastinating? The authors explained various factors in detail that may cause procrastination in the book. Here I list some of them which more or less are able to find in me.

Procrastination may come from early memory. Procrastination is a way to resist restrictions and gain a sense of control over the rules (Chapter 9). Take me as an example, I probably grew up in an over-protected environment that does not have much room to have self-control of life. Everything was planned and arranged with high expectations from my family. This made me very sensitive for a while. The criticism made me lose confidence, praise made me overly proud. There I procrastinated to make my performance not so bad, it also allowed me to temporarily get rid of the restraints, against the wishes of the family. Meanwhile, I was waiting for pushing as I knew someone would come to help me.

Fear of failure or success. There is an old saying in China, “the less you do, the less mistake you could make”. It sounds negative, but it reflects that people can hide possible poor performance or results with not doing or procrastination. Perfectionism is one of the important causes here. Perfectionists with a fixed mindset usually believe performance is directly a measure of whether you are capable and whether you are valuable (Chapter 2). If something you did is not exactly the same as planned or not perfectly done, it makes you feel as you haven’t done anything. It brings frustration and upset. One example is writing this essay. It is supposed to be done at least two weeks earlier before the deadline. The book was read, the structure is in my head. It’s difficult to sit down and start it. I would rather do the laundry, fold the clothes, or clean the house. Deeply in my mind that it is a difficult task, and I’m not good at writing affects me. I am afraid of facing my essay quality is too low to get the points. This makes me willing to stay in my comfort zone instead of being able to face challenges. In the contrast, people who have a growth mindset believe the ability can be developed. Fixed mindset people pay more attention to the result while growth mindset people focus more on the process. They do things they are not good at as it can expand their abilities. Procrastinators are not only fear of failure or flaws but also of success. They are afraid of being successful that they will lose what they have now, people will increase the expectation to them and things will get out of control. Therefore, they never fully show their capability in order to maintain perfectionism in their mind.

The authors introduced two concepts, subjective time and objective time (Chapter 6). Subjective time is about how people feel about time without concerning the clock. Objective time is measured by the clock and calendar which are fixed. People who have no procrastination problems usually find their balance between subjective time and objective time that they are able to have a more realistic estimation about the time required to do a certain thing. Procrastinators are always over-optimistic about time consumption when making the plan. For example, when the Instant Gratification Monkey is in the control, your task can be postponed from originally planned three months compressed into 2 weeks, or you expected to complete within three days compressed into one day and it’s because the Panic Monster wakes up.

There might be people enjoying this last momentary experience, but unfortunately, not everything can be accomplished at the last moment.  Sometimes, it’s just been screwed. And every time such a cycle can cause us self-blame, weaken our self-confidence, and even bring anxiety and pain to our lives. The greatest value of this book is that it allows me to realize that procrastination is not as simple as laziness or lack of discipline. By exploring the psychological factors behind the behaviors, we can figure out how to get rid of this habit and bid farewell to the anxiety caused by procrastination. My next essay will continue with this book to discuss How to overcome procrastination?

AI is shaping our world