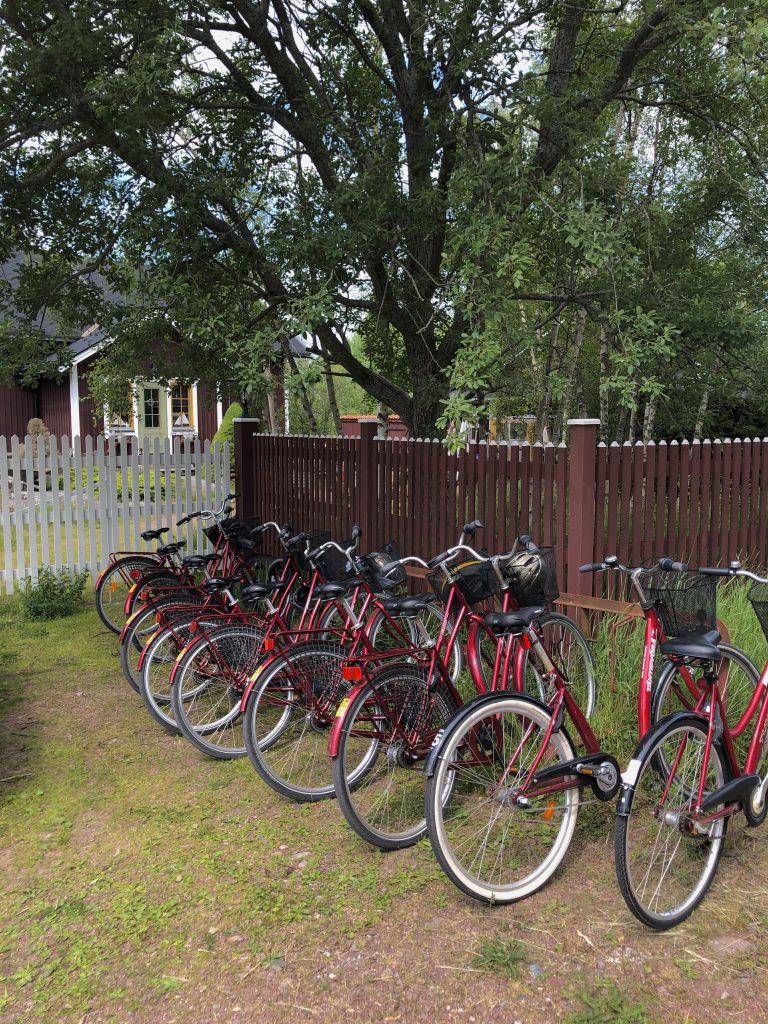 In the past few years there has been a greater interest in countries to improve their economic plans due to a push from society. The current global economy is linear, meaning that most products and services pushed into the market are useable once and have no longevity. The time we have now to make changes in the global economy is critical.

In Europe, the European Union has made a Circular economy action plan to encourage sustainable consumerism, changes in product design, preventable waste, and so on. This creates the possibility for a longer-lasting society and economy. By keeping the resources used in the EU for as long as possible, it builds up a habit of repurposing every product introduced into the market within a sustainable community.

An example of this is Kate Raworth’s theory of doughnut economics, which she wrote a book about in 2017. Essentially, the ‘sweet spot’ in the doughnut is the balance between basic human necessities and the earth’s limited ‘life-supporting’ systems. As seen in the diagram below, the safe space in the ring of the do-called ‘doughnut’ is the ideal place for a society and economy to be housed. The outer space and inner space are the boundaries, and almost push and pull, of the safe space. 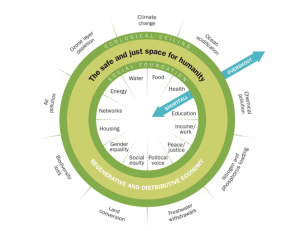 Raworth’s theory complements the issue of our planet struggling with a climate crisis and running out of natural resources. To remain on earth peacefully without any environmental harm, changes have to be made to society and economies have to adapt. In Amsterdam, the deputy mayor for sustainability and urban planning, Marieke van Doornick, has been steadily implementing new projects and practices that aim to achieve a functioning circular economy. For example, all projects started in specific areas and neighborhoods must keep ‘material passports’ to ensure that once the project is finished, all materials can be repurposed and used again, instead of being thrown away. An important observation, and quote that stood out to me personally was that

“Economics is a social science, not a natural one. It’s invented by people, and it can be changed by people.”

Another aspect of having a circular economy is implementing a zero-waste strategy. This is very difficult, considering a lot of the products on the market currently are single use and not made to be reused or broken down to be produced into a new item. After the EU developed its circular economy action plan, Finland went the extra mile to create their own circular economy road map (Abend, L., 2022). One of the main goals for Finland, is the minimize the amount of waste in landfills. This goal is achievable for the country, because with its 5,5-million-person population, most of it has access to various recycling methods already. As of 2021, all apartment buildings with more than five apartments must have the following recycling compartments: cardboard, bio, metal, glass, plastic, and mixed (Finnish Parliament, 2021). However, this new law is not shocking, and comes as a relief to many who maybe lacked proper recycling in their apartment.

One of the reasons that this change in Finland’s law doesn’t come as a surprise is because of their education system exposing children from a young age to recycle. Even in primary schools, children are presented with questions about how to repurpose things. Later in middle school there is a chance for students to participate in Yrityskylä, or a day where they are able to visit companies and see what they do in their daily life. It is a way for them to learn early on, how large companies and organizations are making changes to follow the circular economy roadmap.

The way Finland has their system set up is sustainable and ensures that the now younger generations will be motivated to continue developing the circular economy once they are older. Even in universities, some students are passionate enough about topics like circular economy, sustainable development, and entrepreneurship, that they go on to study and research it.

However, not all Finnish companies have kept their practices up to date on the circular economy roadmap. Fortum, an electricity company, and actually Finland’s largest company was caught in a scandal in 2020. They own a German company, Uniper, who built a fossil fuel power plant in Germany, and it gave customers the wrong impression on their business practices. This power plant, called the Datteln 4, received major lash back from the community and multiple protests regarding environmental safety were organized against it. However, although Datteln 4 is a large greenhouse gas emitter, the company began looking for alternative energy sources and chose to focus on cheap plastic (Abend, L., 2022). Since there is an abundant amount of this cheap plastic in the world, utilizing technology, their goal is to develop a new way of gaining carbon from the process.

Another community struggling with a large amount of waste is Los Angeles, California in the United States. Due the to mass amounts of online orders being placed, and many of them being packaged in plastic mailers, the plastic packaging is now flooding the railroads and even derailed a train recently (Khan, I., Uranga, R. & Winton, R., 2022). The main issue is the trains being robbed and the packages being ripped apart and then thrown onto the ground. Although the train robbing is a serious issue, the amount of waste being left behind is catastrophic.

The materials being used are of single use and result in cheap plastic flooding the ecosystems. And although there are companies that produce bio-packaging, or biodegradable bags for companies to use, they are much more expensive and harder to find. The opening for a large company to start producing biodegradable packaging in the market in the U.S. is big. The second issue with the waste being strewn across the tracks, is that when a group comes to clean up the mess, they are left with a recycling system that is unreliable and not as productive as Finland’s.

Circular economies are how countries, communities, and cities can create a more sustainable future. Which is why it is important to understand that circular economies aren’t just about recycling. It requires new strategies for companies, new materials to be developed, and an attitude for change from citizens. The European Union has taken a big step in ensuring that countries are following their action plan, and even individual countries have made advancements. They are setting an example that the rest of the world should follow, because without making changes to the current economic practices, Earth will not be able to provide for us as long as it could.

Nugent, C. January 2021. Amsterdam Is Embracing a Radical New Economic Theory to Help Save the Environment. Could It Also Replace Capitalism? Retrieved from: https://time.com/5930093/amsterdam-doughnut-economics/

How to Acquire Capital?