Statistics: the conceptual approach is a book on my shelf that I haven’t read for a long time. For statistics, I have had took a beginner class at school many years ago and learned how to use SPSS. Now I have basically no memory of all of these. But when we were doing data analysis for Hekumu project or the data team task, I noticed that statistics is a very important portion. How to collect data, organize data, how to draw conclusions in data analysis, with these question marks I opened this book.

Early statistical activity focused on state governments collecting demographic data on their citizens. Therefore, statistics was considered a word for state-related indicators. Later, statistics began to refer to the collection of individual data points, and as a field of study, statistics can be defined as a set of concepts, principles, and methods for collecting data, analyzing data, and drawing conclusions from data.  (chapter 1.6). This book focuses on the basic concepts of statistics, data collection, data description, probability, drawing conclusions, and some data analysis methods. The content of the book is very rich, I didn’t read it word by word. Here I will share some parts that I am interested in.

The measure of central tendency – mode, median, or mean? These three most common statistics averages are used to describe the central tendency of the samples. When we have a set of data, how to know which measure we should use? (see Table 1.)

We often face situations where people need to choose one of the answers like “voting” is generally the way of making a decision. That is, when all proposals and corresponding votes are counted, check whether the mode of each vote exceeds half of the total votes. If the mode exceeds half of the total votes, the final answer selected is this mode. If there is a double mode, the final answer can be selected by drawing lots, tossing a coin, or negotiating for the two modes.

Mean is the most commonly used average variable. Due to it being calculated by the sum of all the numbers in the observation data set, it is sensitive to individual extreme values. To decide whether to use the mean or the median for a set of data, the author’s suggestion is to work out both. If their values are close, we use the mean, if they are very different, we use the median.

The standard normal distribution (see Figure 1), also known as the Gaussian distribution or the bell curve, is a very common continuous probability distribution. It is important in statistics and is often used in the natural and social sciences to represent an unknown random variable (normal distribution, Wiki). This distribution has two parameters the mean, and standard deviation. 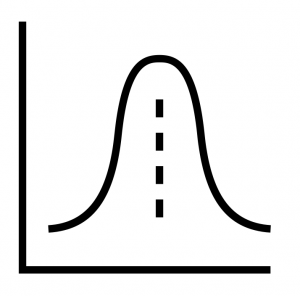 The author provides an introduction to probability and how to use statistical probability in decision analysis. In fact, in business management, many decisions making determines whether the enterprise can make a profit and whether it can develop and expand. Especially for start-ups, investment in products, hardware, technology, and talents requires more scientific analysis in order to make decisions that are conducive to long-term development. This is new to me that investment risk can be analyzed by using probabilistic methods.

The feature of this book is describing the basic principles and methods of statistics by solving practical problems, plus plenty of pictures so that it is easier for readers to understand. Each chapter of this book begins with examples and questions and ends with summaries, additional readings, formulas, and exercises. For me, it is not so convenient that I need to look for the formula page for the explanations after reading the definition and application of the concept.

In addition to the above, the author introduces such as how to collect data, how to describe data, probability distributions for discrete variables, estimation, and hypothesis testing, Chi-square analysis for two categorical variables, ANOVA analysis, multivariate analysis, and so on. I couldn’t understand all the content just by reading it. But as an introductory book for statistics majors, I think it broadens my eyes and gives me a deeper understanding of data analysis. It will help me to conduct research, understand better the journals, and develop analytical thinking skills, which will be a good foundation for the research and data analysis for my thesis next year.

How to create a personal budget