Jim Collins researched with his team of 21 members the topic “How does a good company become great”. It took the team many years to conduct this intensive research. Before answering the research question the team had to find out which companies transformed from good to great. This is not the only questions they had. They also wanted to know how those companies stayed great. 11 companies were chosen. In addition, the team chose 17 reference companies to see what was the variable that separated the good companies from great companies.

The first chapter introduces the reader to the level 5 leadership. There was a similarity found between the great companies and their leadership. The companies that changed from good to great had humble leaders that did not make a big fuss about themselves. Unlike the reference companies where leaders were usually leaders just for the power and money. The leaders from great companies did not feel the need to brag about their achievements, they praise others over themselves. In the interviews the team found out that the great leaders were very shy and did not like to talk about why they were good. They could talk good things about other people for hours but did not like to talk about themselves.

The great leaders also made sure the next leader would start from a solid ground and keep the company running. They cared more about the firm’s future than their own reputation. In some reference companies, leaders were intentionally sabotaging the next leaders in order to make themselves look good. Many of the leaders from great companies wanted to see the company achieving amazing things even after they left.

These great leaders might be shy and humble, but they were also passionate about their job and strong-minded. They were not afraid to make big changes that they believed in. One common factor in all the great companies was that every leader felt passionate about the industry. When they shared this passion with their peers, great things started happening.

All these characteristics make them level 5 leaders.

The level 5 leaders all realized that it matters the most what kind of people you have in the company. They knew that they had to first think about the people and then things. First you must choose the right people and fire the wrong ones. If there are difficulties finding the right people, keep looking. Do not settle for average because you are in a hurry, hurrying will cost you later. Sometimes you need to make dirty moves to get the best group of people. These changes should be made right away, this is only fair to both the company and the employee.

Before starting business, you need to ask WHO not WHAT. When you have the right people in the buss, the WHAT will follow.

It was a surprise for the research team that money did not correlate with greatness. When you choose the right people, who will work passionate towards a common goal, money did not play a role. This could be seen also with the leaders. They did not care about the money; they were just doing the thing that they were passionate about. No external motivation was needed.

Another interesting finding was that when leaders were choosing the people based on their personality and other factors but not based on where they went to school.

The researchers examined the reference companies and found out that some of the companies could have had same business strategy but because they did not pay attention to what kind of people, they hired the results were different. First people then things.

Facing the facts (without losing hope)

The companies that became great were not in a better position than the reference companies. They just faced the facts and changed the way of doing things. Sometimes you have to admit that what you are doing right now might not work. The good news is that by facing the facts you can change things.

You will have to make a lot of good decisions in the business. You don’t have to pass them all, just in most of them. But it is impossible to make good decisions if you are not willing to face the facts. The key is to look at the bigger picture.

As mentioned above, the people you have matter. By creating a culture where people feel like they can have their opinions and they will be listened to, will help the company to know the facts. Even the best leaders can’t know everything. Thus, when you have the right people, they will tell you all the facts. If a leader has an ego too big, opinions might get soften on the way and create false facts. This eventually will create an illusion that everything is okay, and a company will just remain good instead of becoming great.

The hedgehog is all about keeping it simple. The name for this concept becomes from the way a hedgehog defends itself. It is simple but works. This is a way that the great companies think.

Like mentioned before, sometimes you need to realize the facts and understand you are not going to make it. Then you can take a step back and see where you can succeed. It is important to understand where you can and can’t best at. After that just focus on that one thing 100%.

The hedgehog concept includes three circles. The questions in these circles are: what we are passionate about, what affects our financial situation and where can we be the best at. When you ask these questions and get the answers, you’ll have the answer to what it takes to become a great company. Keep it simple.

Sometimes you have to say goodbye to ideas that are not inside your hedgehog circles, even if they would seem like a “lifetime opportunity”. 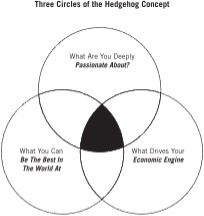 Like in all the chapters before, we get to the topic of right people again. If you have hired the right people you do not need hierarchy. The right people will be disciplined towards the company and you will just have to support them. There will be no need to control them because you know they will do things right.

A disciplined culture keeps responsibilities and freedom balance. Good to great companies might seem dull from the outside but are filled with people who are enthusiastic about their work and therefor will do what it takes to achieve the common goals.

During the research the team found out that the great companies think about technology in a different way. Technology helps, a lot, but it can never be the most important thing in the business.

According to Collins technology resources or the lack of them was not a reason for success or failure. Many reference companies took too much comfort from the technology. With that they try to rush to the finish line. If the technology does not fit in your hedgehog concept you should not use it. The great companies make the changes with careful thought. Companies should take small steps rather than rushing towards the end. 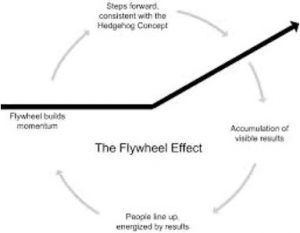 To get the wheel moving, you need many small pushes. At some point the wheel will start to move and it will seem to the outside that that is the breakthrough. This is the time when people will start get interested about the company. All the small steps and setbacks has gotten the wheel to move but those are not visible. From the internal point of view, it is just a natural way of evolving things.

Great things do not happen overnight. Good things can happen fast, but they tend not to last. Consistency is the key. When you are passionate about what you are doing consistency comes naturally.

During the interviews for the research the team asked great leaders what was the one moment they realized things are going the right way. Most of the leaders did not understand the question and even got frustrated. On the inside it is hard to know what was the one moment of success. There is not a single thing that can be mentioned, consistency is the key.

The doom loop is the opposite of the flywheel. If you give your wheel only big pushes and wish for a big breakthrough, there will be none.

As mentioned in many of the chapters, people matter the most. It all starts with the right kind of leader who reaches to the level 5 leadership. After that it comes to the right people working with the leader. The idea that you have can be the best idea in the world but if you have the wrong people around it, it is not going to succeed. All the people should be working towards a common goal, in line with the companies hedgehog concept.