“The free flow of capital from one continent to another and the ever-accelerating change brought about by the Internet have opened a new world. In this world, the future is shaped by the business logic and wits of the world’s largest individual companies and their owners.”

This sentence very accurately sums up the main message in the book Maailman 50 vaarallisinta yhtiötä (the 50 most dangerous companies in the world) by Juha-Pekka Raeste and Hannu Sokala. In our democratic society, people are conditioned to think that by voting for the right parties and electing the right politicians to power we are dictating what the world will look like. The book features companies that have a power beyond imagination, capable of changing how people think and act. The hankering of these companies was done through factors such as the influence these companies have, scandals that they are involved in, and violations of all kinds.

The unfortunate truth is that even though it is these transnational giant companies that are forming the future, the change is not going to be initiated by them. In the end, it is up to the consumers to decide whose products and services they use and who gets a hold of their data. Today data is considered one of the most valuable commodities in business, this is something Michelle Evans talks about in her article Why Data Is The Most Important Currency Used In Commerce Today (Forbes 2018).

By accumulating data companies can even further personalize ads and general experience in their services and through that increase sales. When these huge companies know everything about our personal lives and preferences, there really is no limit to what could be achieved with this information. Often the responsibility to control who has your data is left solely to the individual. In today’s world the fact of the matter is that in order not to give information anywhere, one must completely refrain from using any social media or smart devices, which unfortunately means being quite left out of our society.

Companies are building and rebuilding themselves for many years and in these processes, the culture of corruption was developed and enhanced so that nothing is considered wrong if there is profit in the end. The ethical abyss goes from breach personal data to slave work accusations. Some of these companies are Tencent, JP Morgan, JBS, LVMH, and they will be discussed and analyzed below.

Tencent is a Chinese multinational born in 1998 with the main founder being Ma Huateng, widely known in the west as Pony Ma. It is a technology company and for the first three years, it remained unprofitable until a South African media company named Naspers purchased 46.5% share of Tencent in 2001. The company has a wide variety of products and services like social media, video games, music producers, they even created an intelligent health care platform, and much more.

In 2011 Tencent released WeChat, a messaging, social media, and mobile payment app. WeChat is the perfect example of the reach of Tencent and the market force in China since it is the most used app for this purpose there. It took WeChat a bit over a year to reach a user count of 100 million, for Facebook the same took four and a half years. China is an extremely important country for the world’s economy nowadays and in 2020, even with the COVID-19 pandemic, it was one of the few countries that was able to register economic growth. The WeChat app, for example, was subsidized by the Chinese government, which makes the super quick growth even more understandable.

Tencent is registered in the Cayman Islands, which has no corporation tax and the legislation is quite loose regarding auditing. The company is constantly misusing its consumer’s data and avoiding taxes payment. It is proven that Tencent stores the deleted messages from WeChat, the Chinese government had access to those in a criminal case, but the company denies.

The instability around the safety of personal data creates a hostile environment, and the censoring that happens on the app is something interesting and absurd. The censoring happens every time something related to the Chinese government shows up. The message or news are automatically deleted if it contains some data the government does not allow, for example, matters of human right violations. In 2020, Trump banned US companies from working with WeChat, saying it is a threat to national security and that the company is illegally collecting user data. Chinas response to this was that Trump and the US is using national security as an excuse to secure their dominance in the market.

JP Morgan is often considered one of the most valued and competent banks in the world. It is the world leader in financial services, offering solutions to some of the world’s biggest corporations in over 100 countries. Even the founding story of the bank is a bit questionable to say the least. In the year 1798 politician Aaron Burr wanted to establish a bank in New York even though officially he was not allowed to. To succeed in this, he established a water pipe company and last minute added investment of surplus capital to the company’s agenda. The bank of Manhattan company still had the exclusive rights to the water supply and for years Manhattan was suffering water shortage while Burr focused on investing.

A lot has of course happened in JP Morgan since the 1790s but unfortunately not only for the best. One of the most telling controversies JP Morgan has been involved in was when Bernard Madoff was arrested running a huge pyramid scheme disguised as an asset management company in 2008. Madoff scammed money from 4800 customers, 64,8 billion dollars all together in about twenty years. For twenty years JP Morgan saw the huge sums of money coming into the accounts and what they also saw was that none of it was ever invested into bonds. For all this, the bank paid 2,05 billion in fines.

On top of the countless ways, JP Morgan and other banks like it continue to only focus on making the rich richer they are also involved in a lot of sustainability issues. They are known to strongly finance the use of fossil fuels and are involved in the funding of companies responsible for the deforestation of amazon. The list of questionable companies this bank works with is almost endless. The scope of problems is huge, from dumping toxic mine waste into the ocean to being accused of grossly overpaying CEO’s.

The influence of banks on world politics is one that cannot be ignored. Even if these corporations do not usually own any of the unethical companies, they are involved with they are the source of the money, and as we all know money is what runs the world. Not to mention the data banks are able to accumulate about people and how they spend money. Keeping all this in mind the actions of banks are something we should really keep an eye on when thinking about the future of politics.

If you eat meat, you already ate JBS meat. The Brazilian company is one of the transnational giants and deserves some spotlight. Considered one of the biggest producers of meat, JBS is one of the most influential companies in the world. It is a company involved in many political scandals, involving corruption and environmental issues. One of the company owners, Joesley Batista, have already been to jail due to influence crimes and that’s a little bit of what will be discussed now. What makes this company so dangerous? 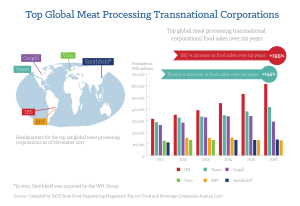 Lobbying is a customary practice, usually between business and public people, that has the objective of influence on the decision-making of public affairs, in which those can achieve some kind of extra benefit by adopting the decision in question. Brazil is a well-known country when it comes to corruption, and it is often a problem that electoral campaigns get sponsored by companies, praxis that was prohibited by the Supreme Court – Supremo Tribunal Federal.

A good example of how this entire process happens is the Lava-Jato Operation, which investigated thousands of crimes such as corruption, money laundering, justice obstruction, and many others. A few years ago, the owners of JBS and many other business people, signed an agreement with Brazilian Justice confessing the payment of bribes for politicians who would support their expansion plan.

Besides this operation, another famous one in which the power of this company can be seen is the “Weak Meat Operation”, or Operação Carne Fraca. It was an operation that aimed to investigate the largest meat companies in Brazil and the payment of bribes to health inspectors of the Ministry of Agriculture. It turned out that JBS admitted they spent about 100 million euros in this type of scheme.

This kind of company has control of an entire and worldwide production chain, and it dictates everything about it. JBS is even connected to the Amazon Rain Forest deforestation in a huge scale. A report from Global Witness claimed that JBS and other meat companies recently bought cattle from farms that are in areas where deforestation is illegal. The mentioned area has the size of 20 thousand football fields. 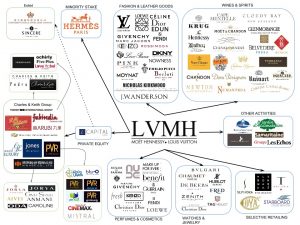 LVMH in its current form was founded in 1987 through the merger of fashion house Louis Vuitton with alcohol producer Moët Hennessy. Today LVMH Moët Hennessy Louis Vuitton is the world’s largest luxury goods company with 75 distinct brands under its name. It is often hard to see behind the huge structures of these corporations, but LVMH is said to be one with very likely use of tax avoidance strategies, and it has at least two high-risk subsidiaries in tax havens.

In 2019 LVMH subsidiary Sephora paid out 160,000 US dollars to the State of Indiana to settle a dispute over tax fraud. LVMH has been involved in multiple ethics-related controversies, but that does not ever seem to rock their boat all that much. Year after a year they seem to do very poorly when benchmarked about sustainable sourcing, human rights violations, tropical deforestation, and other topics but still their unmatched success continues.

Raeste and Tokala compare the actions and brands of LVMH to owning a famous football team. People will already have such a strong image of the brand and its values, that even if the entities that own it change, that will not affect its image. An individual might dislike a specific brand actions and decide to boycott them, without realizing that they are still supporting the same exact company just through a different brand.

It is crazy how impunity goes hand in hand with dangerous and legal companies and how real is the power they have to affect our lives, the environment, climate changes and human health overall. The consequences are never too high for those transnational giants to get a proper punishment. Governments cannot handle playing with the biggest food suppliers or data “owners” and the money is there multiplying and always more than enough to pay for freedom and influence if needed.

To have any say in what this world will turn out to be, people need to demand more accountability and transparency from companies, government officials, and politicians. To have insights on what is important to know about a company and what to share or not with them is not simple. It demands a lot of consciousness that is not easy to acquire, due to lack of information or poor access to it, or even because those powerful companies are also on the media building an image of themselves. It is important to understand that the consumers are also products of a system and influenced by it.